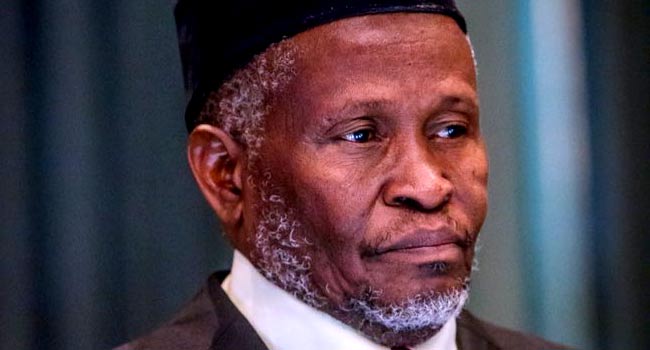 A file photo of the CJN, Justice Tanko Muhammad.

The Chief Justice of Nigeria, Justice Tanko Muhammad, has appealed to members of the Judiciary Staff Union of Nigeria (JUSUN) to call off their industrial action.

Justice Muhammad made the appeal to the judiciary workers following a meeting with some JUSUN officials on Tuesday, his media aide Ahuraka Isah, said in a statement.

He met with some national and local officials of the union for a few minutes in his chamber at the Supreme Court in Abuja, the Federal Capital Territory.

According to Isah, the meeting was convened to explore solutions and ways to mitigate the impact of the ongoing strike on the nation’s judiciary sector.

At the end of the meeting, the CJN asked the JUSUN officials to sheath their swords while the process of making state governments obey the Executive Order 10 and various court judgments on the autonomy of the judiciary were being implemented.