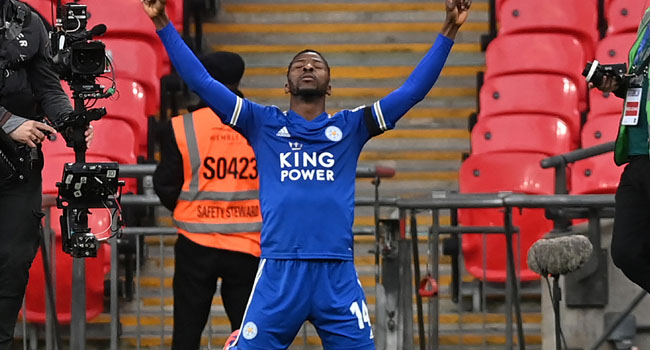 Leicester reached the FA Cup final for the first time in 52 years as Kelechi Iheanacho’s solitary goal earned a 1-0 win over Southampton in front of 4,000 fans at Wembley on Sunday.

The biggest crowd for a football match in England for 13 months was made up of key workers and local residents as part of a test event for the return of fans in bigger numbers in the coming weeks.

An 8,000 crowd will be in attendance at Wembley next Sunday for the League Cup final between Manchester City and Tottenham, while 21,000 will welcome Leicester back to the home of English football for the FA Cup final against Chelsea on May 15.

There was little for the neutrals to get excited about on the field, though, as Leicester struggled to put away an out-of-sorts Southampton, who had been relying on Cup glory to save their season.

Ralph Hasenhuttl’s men have won just two of their last 14 Premier League games since the sides last met in January.

Leicester boss Brendan Rodgers welcomed back Ayoze Perez, James Maddison and Hamza Choudhury to his squad after the trio were dropped for last weekend’s 3-2 defeat at West Ham for breaking coronavirus rules to attend a house party.

But Maddison had to wait for his chance to impress England manager Gareth Southgate as a second-half substitute.

Leicester were the better side throughout but failed to test Fraser Forster before half-time as Jamie Vardy fired over from a narrow-angle before Wilfred Ndidi’s header dropped onto the roof of the net.

The breakthrough came 10 minutes into the second half as Vardy’s pace left Jan Bednarek trailing in this wake.

From his cross, Iheanacho fluffed his first effort, but the ball broke kindly back to the Nigerian to slot home his 12th goal in as many games.

Maddison twice was inches away from wrapping up the tie with powerful shots that flashed just off target.

But Southampton never looked like getting back on level terms as the Foxes comfortably held out for a shot at winning the FA Cup for the first time in their history.