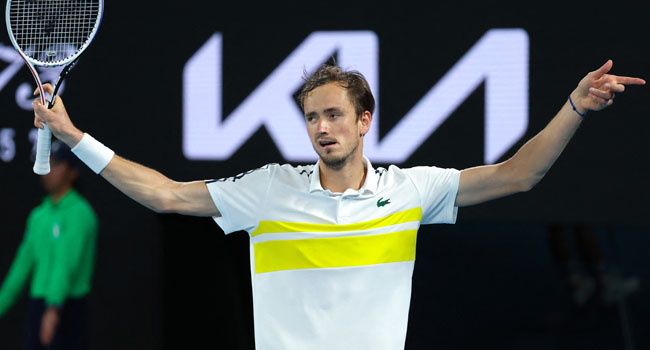 Russia’s Daniil Medvedev reacts as he plays against Greece’s Stefanos Tsitsipas during their men’s singles semi-final match on day twelve of the Australian Open tennis tournament in Melbourne on February 19, 2021. David Gray / AFP Russia’s Daniil Medvedev overpowered Stefanos Tsitsipas to make his first Australian Open final Friday, where he will bid to stop world number one Novak Djokovic from clinching an unprecedented ninth title.The fourth seed proved far too strong for Greece’s Tsitsipas, crushing him 6-4, 6-2, 7-5 in front of more than 7,000 noisy fans at Rod Laver Arena to extend his win streak to 20.The 25-year-old, ultra-confident on the back of his unbeaten run, which includes three titles, has been knocking on the door of Grand Slam success for some time, but has yet to win a title.To finally get over the line he must on Sunday beat top seed Djokovic, who has won all eight finals he has played at Melbourne Park.READ ALSO: Blasphemy: Italian Football…