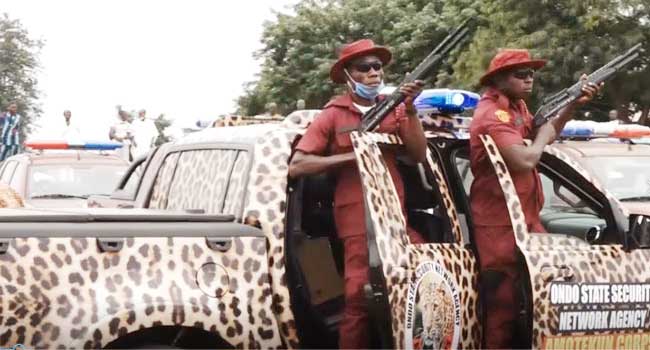 A file photo of Amotukn corps during an operation in Ondo State recently.

Men of the Ondo State Security Network Agency, popularly known as Amotekun, have arrested two suspected kidnappers and rescued three travellers along the Ifira-Akoko/Idoani Road in Ose Local Government Area of the state.

‘It was More Than 10 Minutes Of Gun Battle’, Soludo Narrates How He Was Attacked

The victims – Adewale Adebisi, Ahan Mary and Ladi Bude – were said to have been kidnapped by some armed men while travelling with other church members from Benue State to Akure, the Ondo State capital in the early hours of Saturday.

It was gathered that the kidnappers flagged down the vehicle in which the victims were travelling, ordered the occupants out and took them into a nearby forest.

However, the kidnappers ran out of luck as men of Amotekun corps on getting wind of the incident, stormed the area, in search of the victims in the forest, and succeeded in rescuing the victims.

The Commander of Amotekun Corps in Ondo State, Adetunji…